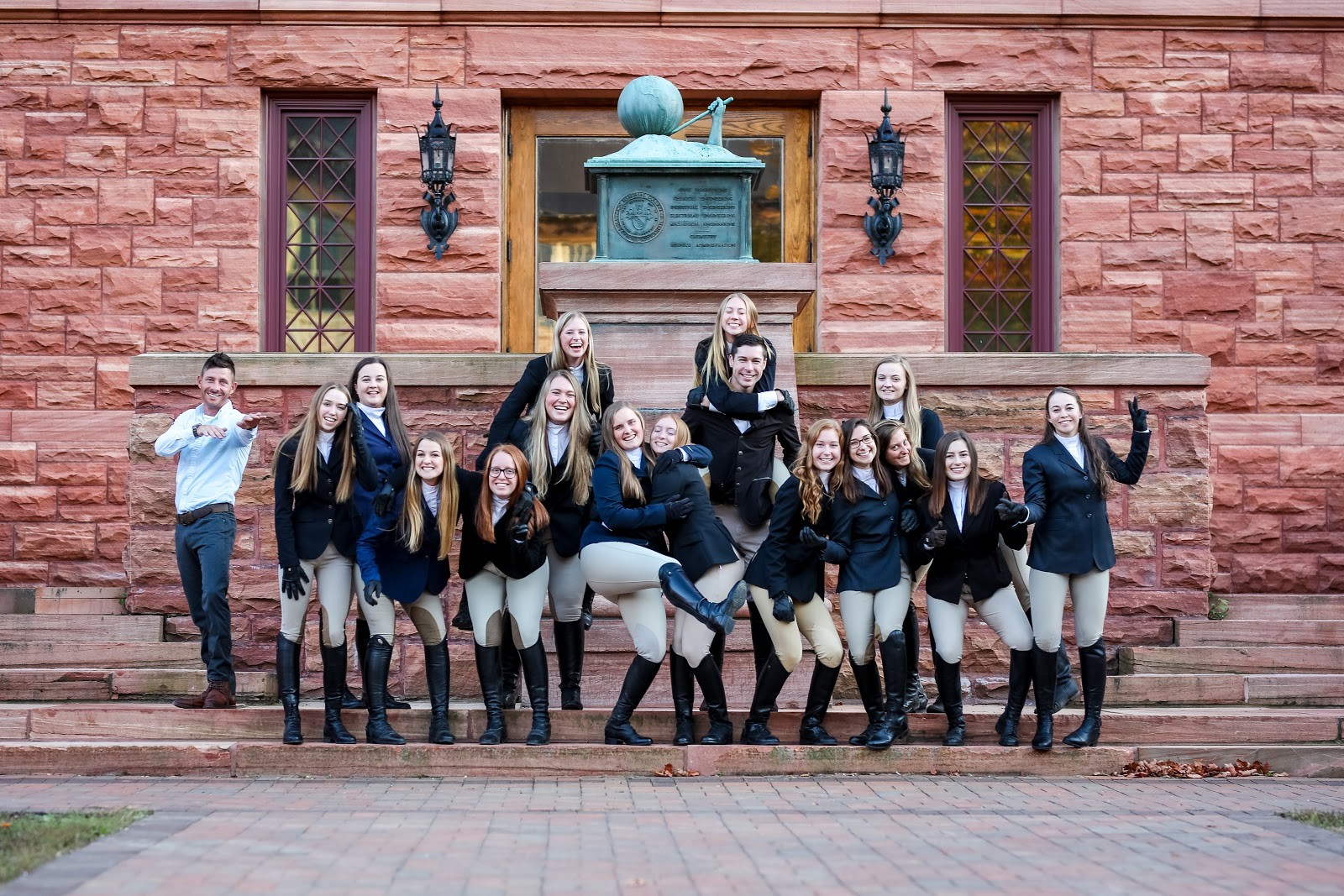 My name is Rachel Rackliff ’22, and I am the publicity chair and co-captain of the Clarkson Equestrian Team. I am a sophomore civil engineering major from Jericho, Vermont. I have been riding horses my whole life, because as soon as I could sit up, my mom put me on a horse. I grew up competing in many different show circuits and training with multiple coaches, and I’ve moved around to many different barns with my horse. When I found out that Clarkson had an equestrian team as part of the equestrian club, I knew it would be a great opportunity to continue doing something that I love.

As an equestrian, your titles include professional water-bucket carrier, professional groomer and professional remover of dirt from a white shirt. The stereotypical equestrian is someone whose life revolves around horses. This sport may be about horses — learning horse management skills and how to ride — but it’s also about developing skills that you will need for the rest of your life.

An equestrian connects with people from many different backgrounds. A relationship made at the barn, and because of horses, can last a lifetime. Riding can also teach a person responsibility, sportsmanship, patience and trust. Being an equestrian means you are responsible for another living animal. A horse needs to be groomed, fed, watered and properly taken care of. Horseback riding is also an extremely competitive sport. People train hard for months for just one competition, and sometimes it doesn’t turn out as expected. Horses can be unpredictable. A plastic bag blowing across a field or even an umbrella can turn a potential first place into a fifth or sixth, so riders need to learn how to be fair toward their fellow competitors.

Being an equestrian also means you need to learn patience — not just with your horse, but with other riders, coaches, trainers and yourself, to see your progress and growth. Horses are big animals that have a mind of their own most of the time, so being patient can be the first step to creating a bond with a horse that leads to trust.

The equestrian world has many different niches. There are different disciplines, competition circuits and ways to be involved with horses. One of those niches is the Intercollegiate Horse Show Association (IHSA). The IHSA is a competition circuit for college students founded over 50 years ago to provide an inexpensive way for college students to be involved with horses. Clarkson Equestrian competes in the IHSA, along with hundreds of other universities.

The Clarkson Equestrian Club has two different branches. The first one is the club portion, which is a way for Clarkson students to have lessons with a well-known trainer for a low cost. The second branch is the Clarkson Equestrian IHSA Team, a competitive group of 15-20 people that travels around the state to compete against other collegiate teams. Competitions are against other Division III universities with equestrian teams that are classified as clubs, similar to Clarkson. The club option is for someone who wants to ride once every week or two and who is looking for a smaller commitment. The team option attracts people with a competitive drive and the will to dedicate themselves to further their riding and horse management skills. A team or club member does not have to be someone who has ridden horses since they were a little kid. The trainer that Clarkson uses welcomes all levels of riders, and IHSA welcomes anyone — from people who have never ridden a horse to people who have ridden their entire lives.

The barn that the Clarkson Equestrian Team rides out of is Rein Tree Stables in Canton, New York. The head trainer, and owner of the barn, is Jerry Dean. Club members normally have two to four lessons per month, which is a smaller commitment than team members have. Team members have two lessons per week and four show weekends a year.

Clarkson’s Equestrian Club was developed based on a dream — the dream of entering a university with the resources and unlimited possibility for growth to start something new. After discovering the simple steps needed to start a club, we grouped up and made it happen. Once word got out, we were amazed by the amount of people who were seeking ways to engage with horses and build a community. As we began to grow, the dream grew with us.

After the club was established, the new goal was to be a team. Not just a recreational team, but a team out there competing against other colleges and universities. Many hours of hard work and dedication were put into developing the Clarkson Equestrian Team. We have been successful for the past three years and continue to excel and be a threat in the arena.

The amount of support that we have received has been remarkable. The organization would not be where it is today without help from just about every University department, and  most importantly, President Collins. Our coach, Jerry, has been with us from the start, and his time and knowledge has been helpful in getting us from being a decent team to a team to beat! We all want to say thank you to everyone who has had their hand in our program and gotten us to where we are today.

Over the past three years, the Clarkson Equestrian Team has become increasingly successful. We are located in one of the most competitive IHSA regions in the country, and this show season, we have consistently placed in the top five or higher in all of our shows. We also won our first championship as a team at the second show of the 2019-20 season. Our show season runs from October through February, and after the regular season, riders can move onto the next stage of Regionals, Zones and, finally, Nationals. Regionals, Zones and Nationals can be compared to quarterfinals, semifinals and the championship in any other sport. We still have one more show weekend in February, and we already have multiple people qualified for Regionals.

Being a part of either the club or the team is like having a second family. Every member of the club or team is like your own personal cheerleader for anything you do in or outside of the club. The club can also be a good stress reliever. Being a Clarkson student can be a lot to handle, so having the ability to go to the barn and forget about all your exams, homework and classes for a couple hours can be very beneficial. The team can also be a great opportunity for learning leadership skills and making connections with other people from across the country. An executive board position isn’t needed to be a leader on the team, because everyone needs to be a leader in the show ring. The competitions that the team travels to are a great way to meet and become friends with students from other schools. The Clarkson Equestrian Club is a great opportunity to try something new or continue participating in an activity that you love.