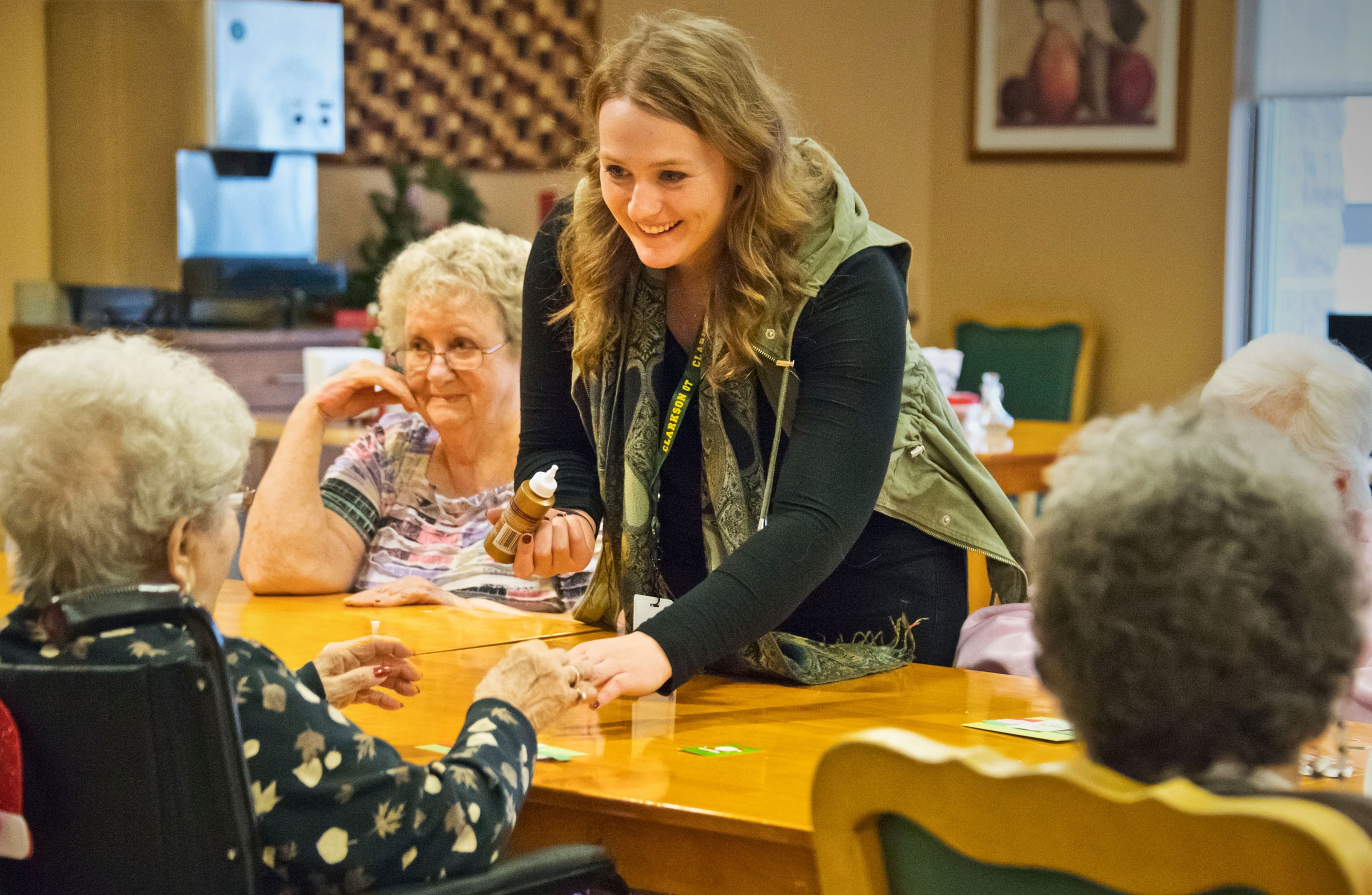 It has been six months since I have begun graduate school, pursuing my master’s in occupational therapy.

It has been six months since I packed up my belongings and left my hometown of Kingwood, New Jersey.

It has been six months since I moved into a nursing home, sharing my new home with over one hundred residents.

Upon finishing my bachelor’s at Rutgers University, I never envisioned moving into a nursing home in my 20s. Deciding to swap the possibility of living with future classmates and peers my own age to living among an older generation has been a decision I know I will never regret. Let’s take a couple steps back and see how this decision came to be.

After agreeing upon entering Clarkson University’s Master of Science in Occupational Therapy program, I began looking for housing options in the area. As I continued my search to find my new home for the next two years, my mom came home one night and told me about a segment she saw regarding a graduate student living in a nursing home. If there is anything anyone knows about me, it is my love for working with geriatrics. There is something about this population that holds a special place in my heart, and I know I am a great fit for working with them. So, when I heard my mom explain this program, I had a gut feeling that this could work in my favor.

An intergenerational program of this kind has never happened before in the state of New York, making me wonder if this possibility even had a chance of occurring. After drafting up a letter trying to sell myself, as well as the idea, I sent it off to five nursing homes in the area that were in a commutable distance to school. After waiting several weeks, I finally got a call unexpectedly from Maplewood Health and Rehabilitation Center in Canton, New York. They had received my letter and were interested in implementing a program like this within their facility. When I had my phone interview with Kim Blair and Terry Micelli, the two individuals who decided to take a chance on me, we were all on the same page as to how this can benefit all those involved. They expected I would spend 20 to 30 hours a month doing various activities with the residents in exchange for room and board. Once the interview ended, a huge weight was lifted off my shoulders — I found my new living arrangements and was going to be around my favorite generation.

At first, I was hesitant. I felt that there was a lot of pressure being the first person to make this program successful. Not only would I be representing myself, but I would also be representing Clarkson and the occupational therapy department. When I began my studies, I initially refrained from telling my classmates where I lived. When asked, I would just simply state that I lived in Canton, the town over. In my head, I did not know how people my own age would react to my living arrangements. When talking to my friends and family back home, they were all supportive and thought how ground-breaking this program was. So, after the first week of classes, I began to tell classmates about living in a nursing home, and word spread, with all of my peers being supportive of me.

Living in a nursing home has given me the opportunity to incorporate what I am studying in school into real-life, everyday interactions with the residents. When learning new material, I am able to make connections between what my professor is teaching with things I have seen among the residents. Occupational therapy revolves around individuals engaging in meaningful and purposeful activities, and being able to incorporate that into my interactions with the residents has helped me successfully build strong connections.

So, what does my average day look like? Well, I usually wake up pretty early to go to the gym on campus prior to class. Then, I attend class for a good portion of the day, usually making it back in time to have dinner with the residents. I catch up with the residents during dinner and then stay for an hour after dinner doing some activities with them, like puzzles, scrabble, nail painting or just conversation. I end the day with a couple of hours of homework before I can finally relax, and then I wake up and do it all over again the next day.

I lead group activities throughout the week, catering to both physical and cognitive aspects and incorporating both during the activities. Some of the activities I have done so far include Wheel of Fortune, Name That Tune, trivia, Jeopardy!, shuffleboard, ball tosses, Minute to Win It and weekly chair exercises. It is a personal goal of mine to introduce new activities each month, some of which they have not participated in before. Being able to hear feedback not only from the residents, but also the staff as to how well these activities are enjoyed makes me realize how important an intergenerational program is. I have had residents say that when they see my name on the calendar for an activity, to expect them there; that truly is the greatest thing to hear. Being able to make an impact on this generation and give them activities to look forward to participating in is the sole reason I think programs like the Giving, Living and Learning program should be incorporated throughout the country. Not being a family member or a part of the staff has given me a special connection with the residents, a connection I thoroughly enjoy having with them.

These past six months have taught me to take life day by day, to listen and let others vent without giving my own opinion, to value relationships with family members, to learn from my elders, to treat this population how I would want to be treated when I am that age, to find joy in little things and to always greet others with a welcoming smile.