Hey everyone! My name is Joe Bushey and I’m a student here at Clarkson. Through my time here at the University, I’ve seen a lot of neat things. Whether it’s a creepy ghost story, an interesting fact about a former professor or student or some history about Clarkson, each of the things I have listed here are part of what make this school unique.

1. First off, let me introduce myself. 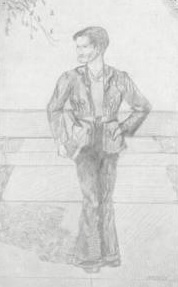 Not to brag, but I may be one of Clarkson’s most well-known students — mostly because I am so elusive! My first letters began appearing in Clarkson’s student newspaper, the Integrator, in 1922. Ever since, I come out of hiding occasionally to make sure no one forgets about me. I was first believed to be a member of the Class of 1923. In 1933, the Integrator reported that I had been awarded a lifetime scholarship to Clarkson, one of my proudest moments. My picture showed up in the 1930 yearbook, and at a 1949 alumni dinner, a speech I recorded was played for the audience. In 1961, the director of admissions invited me to become part of the entering class, although I was unable to finish my schooling with that group. I almost made it through in 1973, and even appeared on the official list of seniors to be voted on by the faculty and trustees for the conferring of degrees. Just before the vote, my name was discovered and, sadly, removed as ineligible. In 1995, my email address appeared on the alumni webpage, and I began receiving messages regularly. In 1998, during a gala dinner party to kick off a fundraising campaign, a telegram I wrote was brought to the podium by a bike-riding delivery man. I may even turn up again on campus in time for my 100th anniversary! 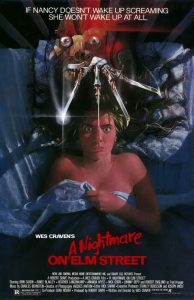 Long before Freddy Krueger terrorized teenagers in A Nightmare on Elm Street, the late director Wes Craven was a humanities professor at Clarkson. In 1968, Craven was cinematographer for a student film, titled Pandora’s Experimentia, co-directed by John Heneage and Ken Lyon ’69. Prompted by a course’s art requirement, three students approached Craven with a proposal to make a film as their project. This forerunner of Craven’s later box-office hits served as a nightmare for the inexperienced filmmakers. Craven admitted that none of them knew anything about sound, editing or cinema. The film cost about $300 to make and was shown twice. Because the directors were members of a fraternity, that house on Potsdam’s Elm Street, which had been a funeral parlor earlier in the century, was chosen as one location of the action.

3. Between 1921 and 1947, the student handbook laid out a list of rules for sophomores and first-year students, who were getting a bit too wild.

In the fall of 1921, the Upper Class Committee implemented Sophomore Rules and even more restrictive Freshman Rules. A few examples:

– Freshmen shall not loaf on the college campus.

– Freshmen shall not wear bow ties.

– Freshmen must wear “freshman caps” until Thanksgiving and from Easter to Commencement, and freshman toques from Thanksgiving to Easter.

– Freshmen are not allowed to smoke on the campus, college premises or streets of Potsdam.

– Mustaches shall be worn by men only in their junior and senior year.

– Canes may be carried only be upperclassmen.

– Freshmen must always salute upperclassmen and greet sophomores first when meeting them on the street.

– Freshmen must at all times carry matches for the upperclassmen.

The annual handbooks carried these rules until 1946, after which student veterans returning from World War II would not put up with them.

4. Clarkson hockey games were played on the Raquette River.

Tradition has it that the first hockey game was played in 1916 by a Clarkson squad against a team from Hogansburg. However, it wasn’t until 1919, when three members of the Class of 1923 formed the Clarkson Hockey Association, that Clarkson hockey was born. The first real hockey team was established in 1921 by the “father of Clarkson Tech hockey,” Murray Walker, and Prof. Gordon Croskery. Although a hockey rink was built on the former playground behind Public School No. 8 (where Clarkson Hall stands today), the six-game schedule of 1922 was played right on the Raquette River! Hockey was played outdoors until 1939, when the first game was played in an arena built on Clarkson Ave., but ice-making equipment wasn’t installed until 1952. The arena was named for Murray Walker in 1975, and games were played there until 1991, when Cheel Arena opened. (Walker Arena’s acoustics were so good that the cross-town Crane School of Music held concerts there until Hosmer Hall was completed in 1974.)

Hard rock band Blue Öyster Cult got its start when drummer Albert Bouchard and guitarist Donald Roeser (aka, Buck Dharma) met up as students at Clarkson in 1965. Bouchard was born in Watertown and grew up in Clayton. Roeser was from Long Island. Bouchard, who studied civil engineering, and Roeser, who was in electrical engineering, were introduced by a friend, Bruce Abbott (who later co-authored Golden Age of Leather with Roeser). With Abbott and two others, they formed The Disciples and played at local bars and parties. The following year, the band reincarnated as Travesty (named after the Blues Project album). By now, their college studies were a thing of the past, and Bouchard and Roeser quit school to make music. They both eventually ended up in The Soft White Underbelly on Long Island, which became — you guessed it — Blue Öyster Cult!

6. Clarkson was the first college in the nation to supply a personal computer to each incoming first-year student. 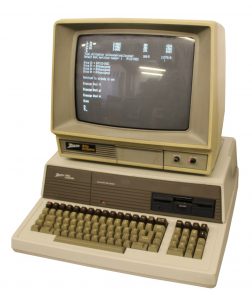 In 1983, each incoming first-year student was supplied with a Zenith Z-100 desktop computer. The Z-100 had 128K of RAM, a 320K 5.25-inch floppy disk drive and a dual-processor system that used Intel 8085 8-bit and 8088 16-bit microprocessors, as well as software packages for Fortran, BASIC and Pascal. News media from all over the country came to Clarkson to witness this first in collegiate education, and by the next year, the story had gone global, with Clarkson featured on the CBS Evening News and Good Morning America, in USA Today, the New York Times, Wall Street Journal, Washington Post, Chicago Tribune, and by United Press International, the Associated Press and more. The program was continued for many years until personal computers had become so ubiquitous that most incoming students were bringing their own.

Actor M. Emmet Walsh (aka, Mike Walsh ’58) is well-known in the film industry, but few know that he graduated from Clarkson with a degree in business administration in 1958. He got his first taste of acting in Potsdam with the Clarkson Theatre Club. He has starred in Broadway and off-Broadway plays and appeared in countless television shows and many acclaimed movies. His film credits include Slap Shot, Blade Runner, The Milagro Beanfield War, Serpico, Raising Arizona, Alice’s Restaurant, Christmas With The Kranks and many more. A small sample of Mike’s television credits include playing Jill Taylor’s father on Home Improvement and appearing in shows such as NYPD Blue, Frazier, Gideon’s Crossing, The Rockford Files, The Waltons, The Twilight Zone, Baretta, All in the Family and Bonanza.

8. Clarkson was named after a beloved Potsdam businessman who died in a sandstone quarry accident. 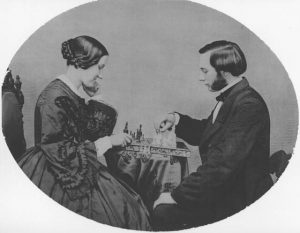 Clarkson was founded in 1896 as a memorial to Thomas S. Clarkson, a successful entrepreneur and beloved Potsdam businessman. After he died from injuries in an accident that happened while he tried to save one of his workers in his sandstone quarry, his sisters, Elizabeth, Frederica and Lavinia, and his niece, Annie, established a memorial to his name by building and endowing an institution that would embody his philosophy. Clarkson’s colors, green and gold, were selected because the goldenrod was Thomas’ favorite flower. The Thomas S. Clarkson Memorial School of Technology opened its doors on September 2, 1896, for 17 young men and women. In 1913, the charter was amended, and the name was changed to the Thomas S. Clarkson Memorial College of Technology. Steady growth and development resulted in the New York State Board of Regents designating Clarkson a university in 1984.

9. Some believe that Holcroft House is haunted. 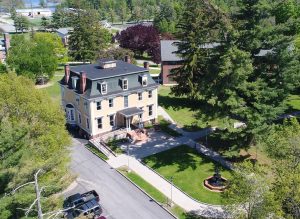 Lights blinking for no reason, whispering and footsteps have all been attributed to the ghost of Holcroft House, where most of the alleged sightings and strange happenings have occurred on the third floor. Interestingly, there was no third floor when Holcroft was built in 1821. It wasn’t until sometime after 1853 that the third floor was added. The house changed hands many times until the late 1920s, after which it remained empty until it was opened as a men’s dorm in 1939. The first record of a ghost sighting dates back to the 1970s, when Holcroft was a women’s dormitory. Those who saw the ghost described her as “a woman in her late twenties or thirties, dressed in a long, dark skirt and a blousy blouse, with leg-o-mutton sleeves, tight at the forearm then expanding and gathering at the elbows.” When Holcroft was transformed to offices in the late 1970s, the strange happenings persisted, although not so often. Most recently, a team of Clarkson researchers studying the possible links between reported hauntings and indoor air quality visited Holcroft to take air samples. The team was looking for clues as to what may lead to some of these phenomena. But so far, no ghosts have been busted.

10. Potsdam sandstone is part of buildings across North America. 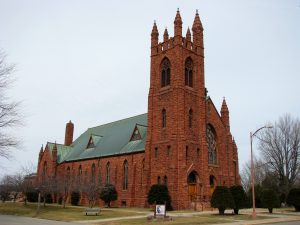 A Potsdam sandstone quarry was the primary enterprise of Thomas S. Clarkson, in whose memory the University was named nearly 125 years ago. He owned and ran sandstone quarries along the Raquette River that furnished stone for many buildings in the Potsdam area. From cutting sheds in Potsdam, sandstone was shipped all over the continent for such buildings as the Cathedral of All Saints in Albany and Canada’s Parliament buildings in nearby Ottawa. Potsdam sandstone is the hallmark of our regional architecture. On campus, you will find it in the entry gates, the walls of Woodstock Lodge, the fireplace in the Adirondack Lodge, and, of course, in our first building, Old Main. Engineering tests prove Potsdam sandstone is harder and more durable than granite. The formation of Potsdam sandstone required more than 500 million years. While the formation of Clarkson University has taken, so far, a mere 122 years, there are strong similarities between this extraordinary stone and a Clarkson education over the test of time. Potsdam sandstone symbolizes the strength of Clarkson and our education.