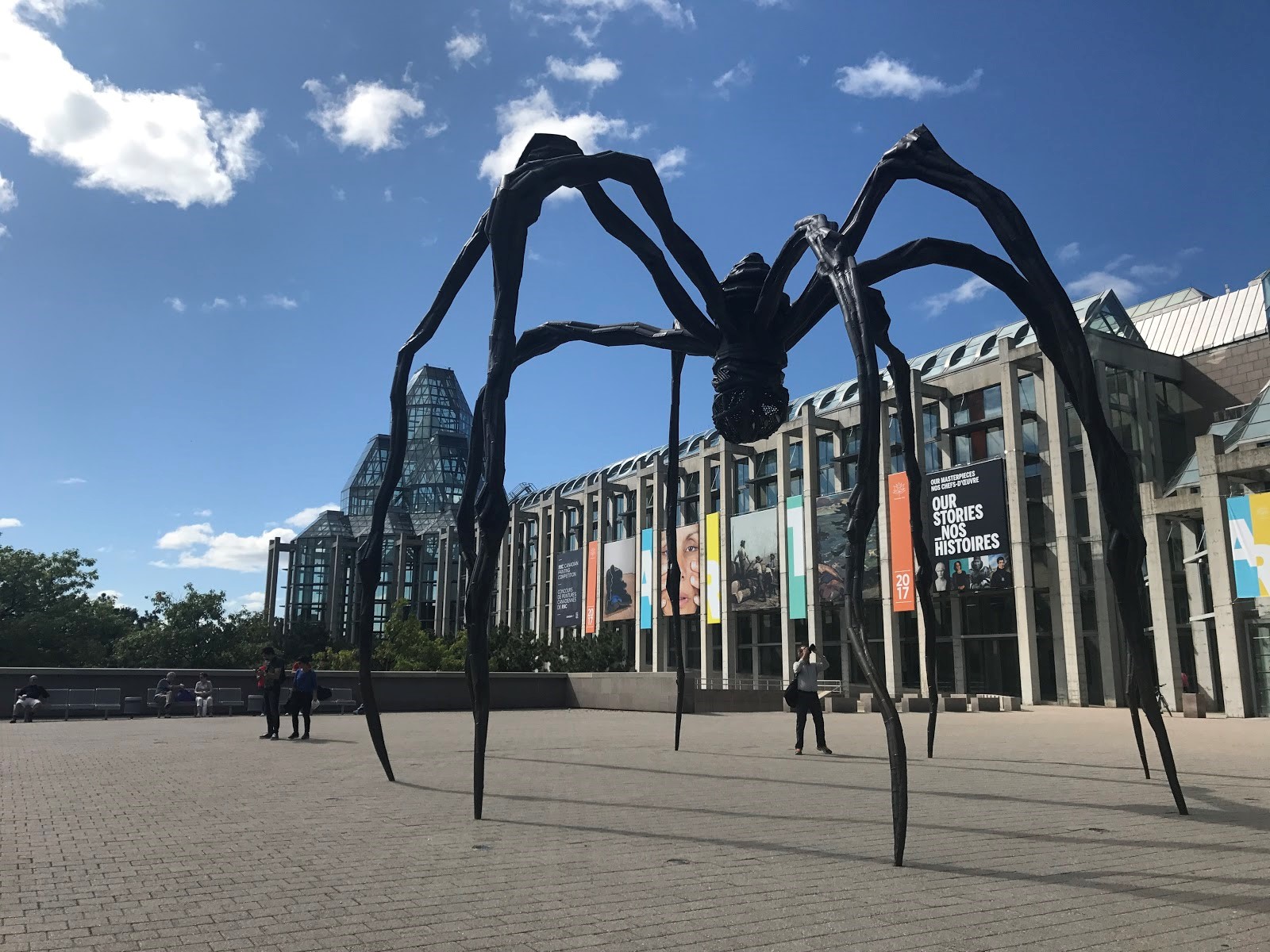 Canada — our neighbor here in the North Country! Canada has a lot to offer, and I highly recommend you visit. Clarkson may be in a rural location, but that doesn’t mean we don’t have quick access to some amazing cities.
Clarkson requires business students to bring either a passport or an enhanced license. This is because the program focuses a lot on studying abroad, and they want to make sure you are able to go. Even if you’re not required to have a passport or enhanced license for your major, we recommend you get one anyway because of how close we are to the Canadian border.
Many students like to take weekend trips to Ottawa or Montréal during the semester, since these cities are only a few hours away from us. Weekend trips to a new city (and, if you’ve never been before, to a new country!) are a great way to bond with friends and make some new memories. The two cities are very different and have lots of unique events going on all the time. They also have a lot of different restaurants, and there are plenty of shopping options.
Ottawa is less than two hours away from Clarkson’s campus — closer than Syracuse or Burlington! The best way to get around Ottawa is definitely walking, so if you stay downtown, you can walk nearly everywhere you want to go. Uber is also available there, which is super helpful in case you get lost or need to go further into the city (you’ll need to have data on your phone for this). Ottawa has a lot to see and experience, and I highly recommend going in the summer or fall because of how beautiful the city is. It is one of the cleanest and well-tended cities I have ever been to. So let’s get into what there is to do in Ottawa.
The ByWard Market is an awesome place to find a lot of local products, from fresh produce to maple syrup and jewelry. It covers about four blocks and has everything from restaurants and boutiques to galleries, cafes and museums. The mood here is really chill, and it just has an overall really good vibe. There’s always something going on here, including street performers and special events they’re hosting. I’d definitely recommend trying to stay near this area when you visit Ottawa. 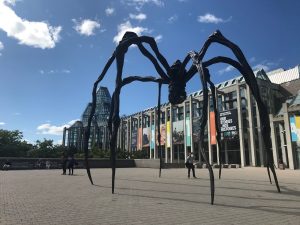 The National Gallery of Canada is a really unique and modern building in Ottawa — not only beautiful on the inside, but also on the outside. I spent hours here just looking at all of the different pieces of art. They have many different collections, rooms and floors of art on display. The experience starts outside the main door with this giant spider sculpture, and you also get an amazing view of the building’s unique architecture. They offer student discounts on the entrance fee as long as you have your student ID, so remember to bring it! 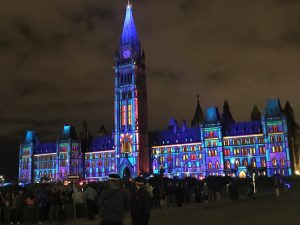 Parliament Hill is an extremely beautiful place to visit that is rich with history. I recommend going to the Parliament light show if you get the chance, as it displays a story of the history of Canada on the Parliament building and is absolutely beautiful! You may want to get a seat early though, because it gets crowded fast. This event is also free, and who doesn’t love free in college?!
The Canadian Museum of History has everything from displays on hockey history to interactive areas to Indigenous artwork and history exhibits. The Indigenous section was my favorite part because of the rich history that it delved into. It was something I have not often been exposed to and is a really good opportunity to learn new things. 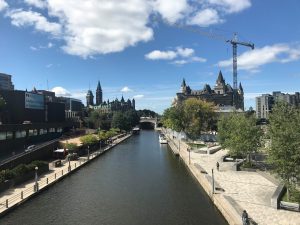 The Rideau Canal is another free attraction in Ottawa. During the warmer months, the waterway is filled with boats and canoes, and the sidewalk along the river is filled with people running, walking and biking. I recommend taking a boat tour, since it’s a great way to see the city. In the winter when the canal is frozen, you can skate on the canal as well. It’s often packed during the colder months, and some people even skate to work! This is a very scenic way to get some exercise, and the views from the river can’t be beat. 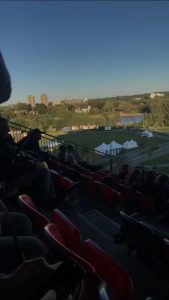 Who goes to Canada during hockey season and doesn’t go to a hockey game?! But if hockey isn’t your thing or you visit outside of the hockey season, Ottawa also has football! It’s a little different from American football, but is just as entertaining. The views from the stadium are also just breathtaking.
Montréal is about two hours away from Potsdam, and although the city is largely French-speaking, most people can speak English too, so you shouldn’t have any trouble communicating with people. Just like in many other cities, the best way to travel in Montréal is by a mixture of walking and public transportation. The metro (subway) system in Montréal is clean, fast and fairly easy to use. You can even rent bikes and use the city’s many bike paths to explore. Montréal can get hot during the summer and very cold during the winter, so make sure to dress for the weather. Grab a hat and sunscreen during the summer and boots and a warm jacket during the winter. Montréal is filled with people from all over the world, and because of this collection of cultures, there are so many things to see, hear, eat and explore in Montréal. Since most of my family lives in Montréal, I’ve visited it countless times. Below are some of my favorite places to go.
One of the biggest attractions in Montréal is Mont Royal. Mont Royal is usually referred to as a mountain, but it is actually a cluster of three hills shaped by glaciers. There are four universities, three hospitals, five churches and five cemeteries on Mont Royal, including a prehistoric burial ground. Alongside these large attractions are smaller places to visit on the mountain, such as parks, woods and lakes. You can explore these either by joining a walking tour during the summer or a snowshoe tour in the winter, or just by walking around on your own. You can also rent a rowboat on Beaver Lake during the summer or skate during the winter. 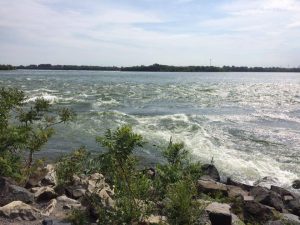 Afterward, you can find snacks and drinks in the Beaver Lake Pavilion. No matter whether the weather is hot or cold, Mont Royal is covered in people enjoying the fresh air.
Besides the many parks on Mont Royal, tons of parks of varying sizes are scattered throughout Montréal. My two favorites are Parc des Rapides and Parc La Fontaine. Parc des Rapides is huge, but the best part of the park is the very end, where you can hear and see the Lachine Rapids. You can even watch people in kayaks float and spin through the waves. Along the footpaths of the park are flowers, birds, picnic tables and benches. There are information plaques so you can read up about the history of the park and rapids or learn about the birds and plants that live in the park.
Parc La Fontaine may be Montréal’s most well known park. I’ve only visited once or twice, but I remember the large amount of green surrounding the people in the park and how everyone seemed to radiate a sense of relaxation. This park is the perfect place to lay out a blanket and read, eat or nap. 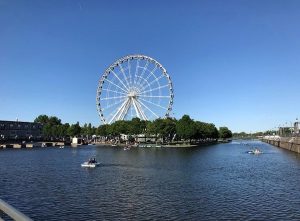 Another attraction of the city is Vieux-Montréal, or Old Montréal. Old Montréal is made up of modern restaurants and businesses woven into the older stone buildings and cobbled streets. One of the biggest parts of Old Montréal is the Old Port. You can walk along the St. Lawrence River where ships used to dock, or you can visit the more modern attractions, such as the IMAX Theater and ferris wheel. There are also frequent events during the summer at the Old Port, such as Canada Day celebrations and The Great Montréal PoutineFest. Close to the Old Port is Place Jacques-Cartier, a cobbled street filled with restaurants, shops, art and sometimes street performers.
Another similar area is Place d’Armes, located right outside the Place d’Armes metro station. Here you can see the Basilique Notre-Dame de Montréal, the first church built in the Gothic Revival style in Canada. 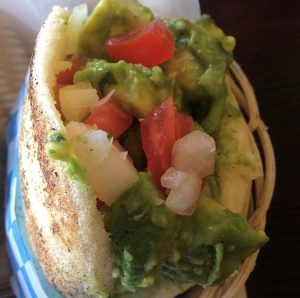 One of the most important parts of visiting another place is the food! There are hundreds of places to eat and drink in Montréal. Apart from the restaurants, cafes and small convenience stores, there are also some awesome open air markets, like Marché Jean-Talon, where you can buy all kinds of fresh food.
Like any city, Montréal is full of familiar places like Starbucks and other chain restaurants, but the most interesting places to eat in Montréal are the tiny places you can’t find anywhere else. My two favorite restaurants in Montréal are examples of such spots. The first is a Portuguese grill restaurant called Jano. Here you can eat traditional Portuguese food like caldo verde, a cabbage soup made with chorizo. They also serve grilled meat, like chicken or rabbit, or grilled seafood, like squid and sardines, served with Portuguese-style fries.
My other favorite place is a Venezuelan restaurant called Arepera that is 100 percent gluten free. Here they serve a traditional Venezuelan food called arepa, a type of cornbread. You can get various types of sandwiches made with this bread and filled with things like beef, chicken, pork, fish and vegetarian and vegan options like avocado and grilled vegetables. You can also get plates of rice, beans, plantains and your choice of a meat, fish or vegetable option. Of course, along with the plate comes an arepa as well!