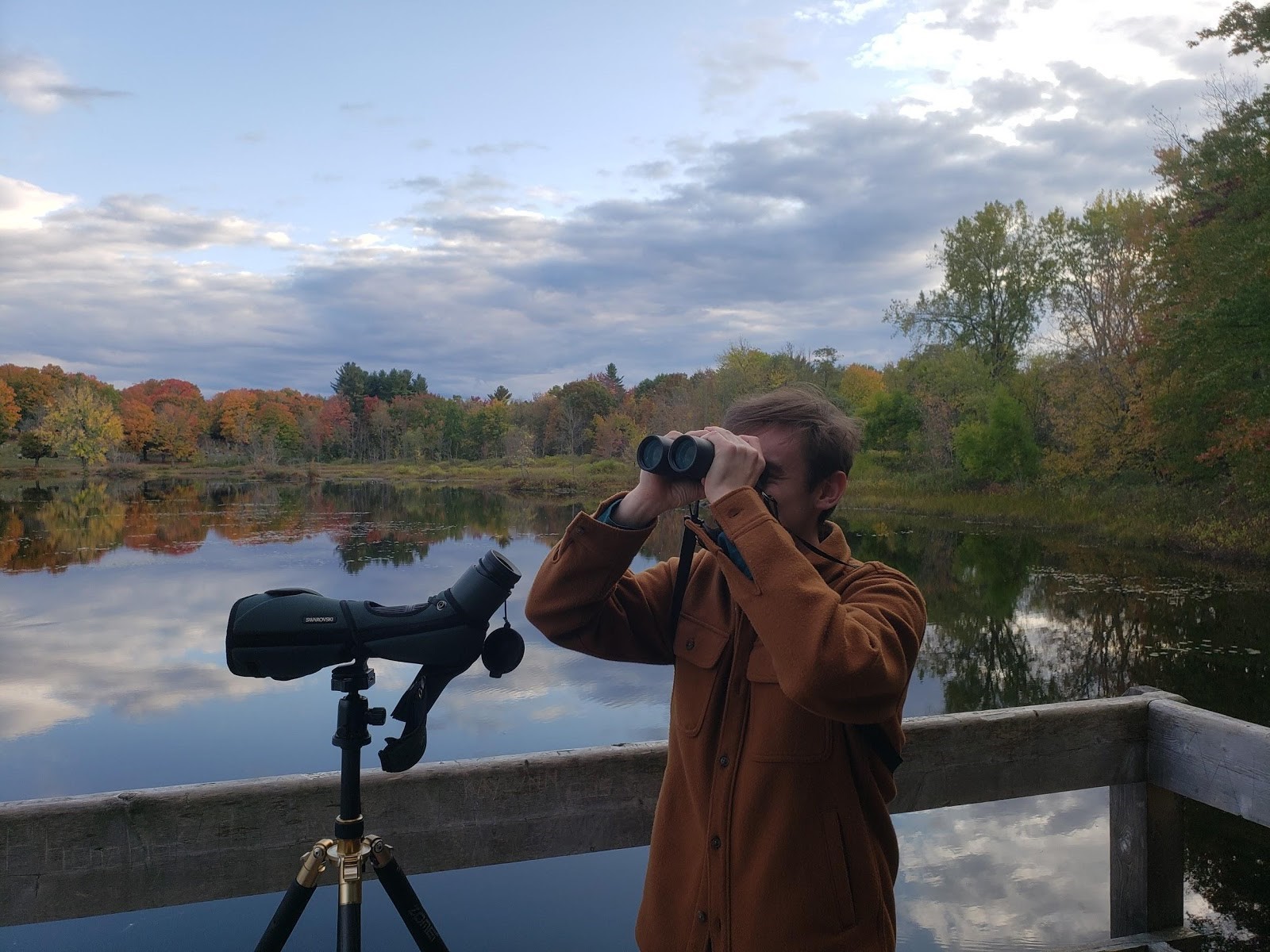 My name is Nick Kachala ’22, an aeronautical engineering major. I’m from south of Rochester, New York. I’ve been into birds seriously for eight years now and have considered myself an avid birder for the last seven of those. Besides birding, I’m a classical pianist and a hiking enthusiast.

A birder is different from a birdwatcher. The best distinction is that a birder travels all over to record different species and develops a tiered expertise over many years.

“Take advantage of the extraordinary geographic area in which our school is located.”

I first got into birding by having an out-of-season wintering Eastern towhee at my bird feeders and having no idea what it was. Imagine a large chunky sparrow, black above, white below and burnt orange on the sides. I thought it was a Baltimore oriole!

I had a small beginner bird guide from when I was really young, and I remember spending hours trying to find out what it was after I saw it didn’t match the Baltimore oriole picture. I had a few more of these instances of not knowing what birds were. Mistaking a killdeer in flight for a tree swallow comes to mind as a similar incident.

In May 2014, I found the Rochester Birding Association and went on a beginner field trip to a local woodlot known for migrating warblers. I came to the field trip only thinking there were about 20 species of birds in the area, but as the trip began, we had already exceeded 20 in the parking lot alone. To hear names of species that I never knew existed before was exciting.

I’ve always had an interest in almost everything, and having something enter your life that you never knew existed is genuinely thrilling. It was almost like discovering an entire field for the first time. As the trip progressed, the sense of community that I felt was overwhelming. Let’s just say I had “bird fever” — I was hooked!

Since then, I’ve spent a good portion of my free time learning all about birds and building my life lists (currently a New York life list of 321 species). If a rare bird shows up within a certain radius of my house, it’s almost a guarantee that I’ll be driving three, sometimes four hours away to “twitch” (chase after) a rarity, such as a species regularly occurring in the Western U.S. showing up in New York. I’ve gone on a few chases that took six hours one way.

Oh, the places birding takes me … I love exploring new places, be it quiet mountain towns, bustling city parks, desolate dirt roads or touristy wildlife refuges. I love all the little places I discover around New York state — places that I otherwise would have never known existed.

A golden-crowned sparrow showed up in Downsville, New York, a village on the Delaware River in the Catskills with a covered bridge. A small, quiet town was suddenly overrun with birders as they tried to add this species to their lists — only the sixth recorded in the state. I tried in January but missed it (“dipped” in birding lingo).

As the rarity stayed the winter, I felt an impulse to get a bird that I could very easily never get again in New York state. So, I drove down from Clarkson, leaving at 1 a.m. to get there at sunrise in March 2019 to successfully get it. Worth it.

COVID-19 has forced birders to stay close to home. With that in mind, there’s never been a better year to explore our close natural resources. Clarkson’s property has so much to offer in terms of birding opportunities. Two main areas come to mind: the Back 40 Woods and the Munter Trails.

The Back 40 Woods provide great forested habitat for breeding birds in the late spring and early summer. On a good morning, you can hear the tapping of yellow-bellied sapsuckers. Black-throated green warblers whistle their five-part song. A choir of red-eyed vireos entertains. A watchful eye can spot red-breasted nuthatches entering their cavity nests.

Since it’s October, most of the breeders are gone. Right now, check the Back 40 for resident birds like white-breasted nuthatch, black-capped chickadee and some great blue herons (well, at least until the beaver pond ices up).

Pileated woodpeckers often put on a show if you’re lucky to catch up with them. Also, owls are entering breeding season. If you’re out for a night walk, keep your ears peeled for some caterwauling barred owls or dueting great horned owls.

Last week I thought I heard an uncommon-to-rare Eastern screech owl (which would be a first for me in St. Lawrence County), but it was distant and hard to confirm over the light noise of Route 11.

The Munter Trails meander along the west shore of the Raquette River, from a starting point on Maple Street in town (next to the Stewart’s Shop) to a southern terminus at Bayview Cemetery.

The Munter Trails go through four different habitats, which means bird diversity is better than the Back 40. I recently got 36 species in a morning, including several migrating warbler species and a new-to-me-in-St.-Lawrence-County Wilson’s warbler.

As the seasons continue to change, check the Raquette River for waterfowl like hooded merganser, bufflehead, common goldeneye and other ducks, and large flocks of Canada geese. The first migrant dark-eyed juncos and white-throated sparrows of the season are starting to show up.

Bayview Cemetery holds large numbers of sparrows in October. It could be worth walking the paths to look for something more unusual scratching through the leaf litter.

Birding Around the North Country

The North Country is ornithologically significant. For example, the St. Lawrence Valley is one of the last hold-outs for the declining golden-winged warbler. In Rochester, finding a single migrant golden-winged warbler would bring crowds from all over Monroe County (and perhaps some bordering counties).

Up here, it’s common to find multiple golden-winged warblers at certain spots with little effort. Lonesome Bay State Forest and the Redwood, NY area are some of my favorite golden-winged sites.

The St. Lawrence River itself holds migrating waterfowl and shorebirds. Duck migration is picking up right now. Coles Creek State Park is an excellent place to scan the river for migrating flocks of waterfowl in the morning.

Lower water levels on the river in the fall expose shoals and sandbars: habitat for shorebirds. Shorebird migration has peaked in the region as of late September, but later migrants like dunlin, American golden plovers, white-rumped sandpipers and others are still moving.

The county saw its first, second and third records of Hudsonian godwits, a large brown wader with a black speckled back and a long bill, this year. I was fortunate to see the third record on Saturday, Oct. 4, after a friend texted the location out.

Indian Creek Nature Center and Upper and Lower Lakes Wildlife Management Area in Canton is another excellent local hotspot. Tons of migrants pass through here each fall and spring. Although we are already past the warbler peak, sparrows are still moving through in good numbers. There’s also an observation deck at both locations that provides views of Lower Lake, which is filling up with more migratory waterfowl each week.

If you’re up for a little longer of a drive, the Adirondacks have some very specialized birding opportunities. In the summer, Bicknell’s thrush, an endangered species that breeds only in stunted spruce forests usually above 4,000 feet in elevation, breeds on most of the High Peaks.

Although gone now (I had my last of the season in mid-September on Gothics), there are still plenty of specialties like boreal chickadees, Canada jays and black-backed woodpeckers that are year-round residents. I recommend using a source like eBird to track recent sightings and get the specifics. Pine siskins are also moving into the region in large numbers, and red-breasted nuthatches are migrating into the region with unprecedented force right now. The Adirondacks surely have a lot of avian activity.

Whether you’re out for a morning walk, a hike with friends in the Adirondacks or an exploration of a nature preserve, slow down and watch the environment around you. Take advantage of the extraordinary geographic area in which our school is located.

If you see a bird, stop and watch it. What is it doing? Does it have an unusual feeding pattern? Does something about its plumage interest you? How does it fly? Now apply the same to any flora or fauna. As we become more observational, we become more inquisitive. Who knows, maybe you’ll discover a new interest.

Birds in Your Backyard, and Beyond

Ornithologist and Clarkson Professor of Biology Tom Langen offers insights about feathered visitors to your yard in a lush multi-part video series, “Up Close and Personal with the Yardbirds,” from North Country Public Radio. And check out his tips on birding the northern flyway in Out Here digital magazine.