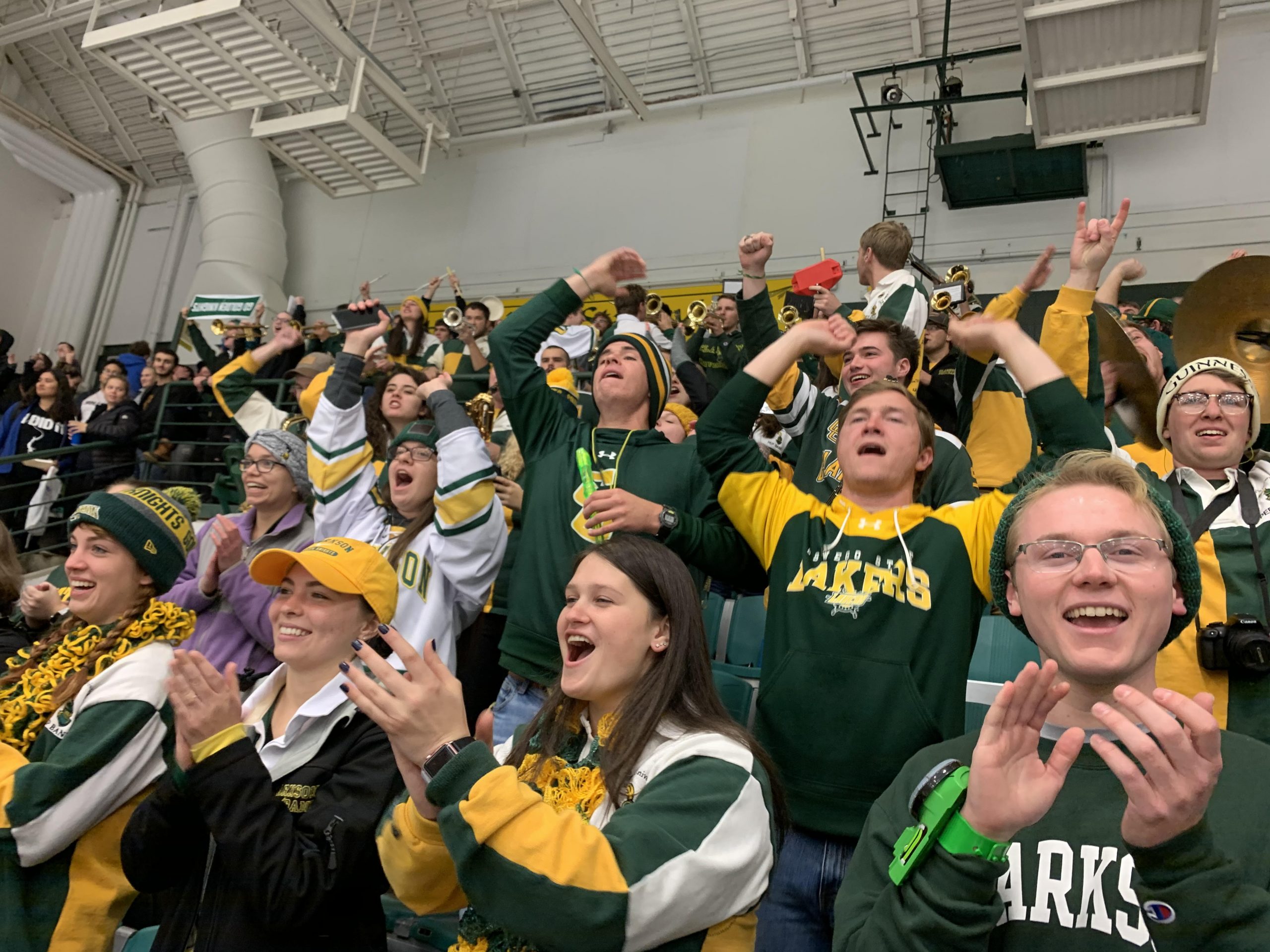 Hi everyone! My name is Nick Schalago ’22, and I am the social media chair of the Pep Band here at Clarkson. This blog post will tell you everything you could possibly imagine about Clarkson’s Pep Band.

There are more than 200 clubs and professional societies at Clarkson that every student can join. When I first came to Clarkson, I was quickly notified of the Clarkson University Pep Band, because I showed interest in clubs that involved music. My first instrument that I learned how to play was the flute in fourth grade. Fast forward 10 years, and learning alto saxophone, trumpet, baritone and trombone brought me to the world-famous Pep Band. You will find me in the back of the band playing trombone! Having a band available at Clarkson has allowed me to become part of a family over the two years that I have been here. Yes. I said family.

My advice for incoming first-year students is to understand that not all members of the band have the musical background I have, nor is the band’s environment competitive. I started learning trombone during my first semester here with the help of upperclass students. I cannot read the bass clef, but I am still able to have fun during hockey games. Speaking of which, not everyone in the band plays an instrument. Some members just enjoy the family feel inside and outside of Cheel Arena, so they clap during games or play the triangle. You name it, and the band probably has someone that plays it.

I am from New Jersey and am six hours from home. This does not seem like a big deal to most, but being a family guy, I needed a group that I could call my family away from home. The Pep Band quickly found and recruited me. I became the freshman representative of the club during my first year because I fell in love with the club’s environment. No other club helped me realize that while academics are important, so is having fun during the weekends.

I was the typical Honors student who always had an abundance of homework, only to cram it all into the weekends. One of the members of the band called me on a Sunday morning early in my first year. I had multiple essays due the next day that I had procrastinated writing, and he said, “Nick. You will not remember being up past 10, but you will remember having fun with the band.” To this day, I take his advice because he is right. Am I up till 11 some nights? Yes. Sometimes I’m up until 1, but I do not remember the work I was doing. I do remember going to Lampson Falls with the band  that Sunday though. We swam, hiked and hung out. I was able to leave my phone behind and enjoy being in the present for the first time in months. Whether it be participating in hockey games, kickball, black death ball, hiking trips, away games, apple picking or pumpkin picking, the Pep Band never fails to disappoint me. I am always in a good mood while I am with the band.

Some of the members of the Pep Band dressed up for “Tony Tuesday”!

I often find myself relieved when I am with the band because I am in the present moment and all of my stress dissipates. The five exams I have the next week feel a bit less daunting, the three group projects all due at the same time seem more bearable and all of the homework in between finds its way to the back of my mind. I do not know how to describe it, but the feeling is addicting. I feel at home with the band. After being on the executive board my freshman year, I wanted to keep giving back to the band, so I ran for the social media chair position. Check us out on Instagram, Facebook and Twitter, because I post on all three platforms!

How Long Does the Season Last and How Many Games Do You Play For?

This past year, the first game we attended was the women’s hockey game at Syracuse University on September 27. Of course, we had practices before then to prepare for the game. Between the men’s and women’s teams, we play over 60 games. The season lasts from late September to mid-March if either team makes it to the playoffs. There are typically six combined away trips, such as Harvard-Dartmouth, Colgate-Cornell, Quinnipiac-Princeton, Yale-Brown, Rensselaer Polytechnic-Union and, of course, St. Lawrence. This means that our hockey team plays against both of these teams once in the same weekend.

How Often Do You Practice and Play for Games?

We practice every Monday to get ready for the games. After all, we have to sound good while we are having fun! As for playing during games, some members make it to all four games in a weekend, and those with more homework try to make it to at least one. The great thing about Pep Band is that you do not have to go to every game or practice. Pep Band is as much of a commitment as you want it to be.

Is There a Catch?

Dues are as low as possible in order to be inclusive. The first year is $25, and all subsequent years are only $15, which is the minimum amount for clubs here at Clarkson. Why is the first year more? Simply put, we give each new member a polo once they come to enough events.

Really Interested and Want a Better Feel for the Band?

Last year, the Pep Band offered its first pre-Orientation trip, and we will have another one this year, packed with many fun events. Playing music, bowling, eating and hiking are some of the activities that we have in store for those that attend. For more information, go to https://sites.clarkson.edu/pepband/