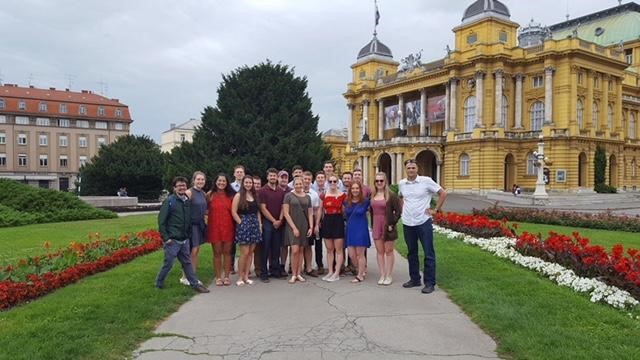 You may be thinking that once you go to college, your summers will be all fun and play — and they will be! Clarkson students are given amazing opportunities for their summers. These opportunities are some that you’ll want to capitalize on for your future. At Clarkson, most majors require completing an internship or co-op. Summers are a great time to complete that requirement. Many of our students use summers to go on internships all around the country.

Co-ops are a little longer than most summer internships, though, and usually go through one semester and the summer. Don’t worry, you’ll still be graduating in four years! These co-ops and internships allow you to stand out against other college graduates entering the workforce, and the experience you get from them is highly sought after by companies. On top of the great experiences co-ops and internships give you, they can also provide you with job opportunities after graduation if the company you interned for wants to keep you! Many of our graduates at Clarkson have earned jobs this way.

In addition to internships and co-ops, Clarkson also requires business students (including engineering and management) to study abroad. Even if you aren’t a business student, Clarkson still encourages studying abroad because it differentiates you from other college graduates by equipping you with the unique experiences that come from living, studying and traveling in a different country. It’s an advantage that looks great on resumes! (And having other languages also helps a lot and is something companies love.)

Through these trips, students meet with businesses from all over the world to understand how they operate in other countries. This truly is an awesome learning experience and a great way to network. I know when I was doing my study abroad in Canada, we went to a few companies that were hiring and told us we should apply! These business trips give students a foot in the door at companies since you’ve already learned about them and met some of the bosses and managers.
For out blog entry this week, we got in touch with a few students who studied abroad this summer so they can tell you all about their experiences. 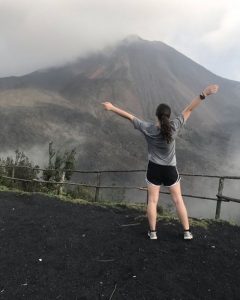 “I was in Guatemala for a medical volunteer trip with Clarkson’s Doctors Without Borders! I worked in a clinic in San Bartolomé and visited different communities on a medical campaign my second week. I got to see and diagnose patients, with the help of a local doctor, and also got to educate the patients on personal health and hygiene. This picture is from one of our excursions after work: we hiked Volcán de Pacaya, which is one of three active volcanoes in Guatemala.” Kaitlin Okun ’20 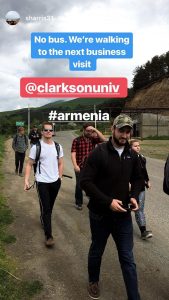 “I am co-chaperoning a global business trip to Armenia and Georgia with my husband, Joseph Andriano, who’s an assistant professor of law in the Reh School of Business. We were on our way to visit the Armenian Tree Project (ATP), a non-profit that provides environmental education to kids and reforests Armenian landscapes that were decimated after the fall of the Soviet Union when people didn’t have electricity and cut down trees for fuel. The ATP is in a rural village called Margahovit. Our bus broke down about a mile away, so we decided to walk! The students were great sports, and, happily, the bus got fixed.” Sarah Harris

These next photos and information come to you courtesy of Tricia Loso ’18, who just graduated and did her business trip this summer. She explains what traveling abroad is like, what they did and what they learned from their business trips. Tricia spent two weeks in Croatia this past June, exploring the area and culture, as well taking several unique business trips. 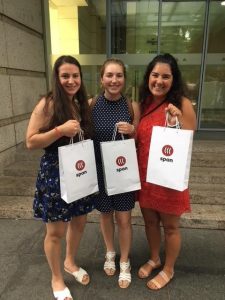 “We visited an international IT company, Span, which provides IT solutions to companies around the world, their largest customer being McDonalds. While their global headquarters is located in the capital, Zagreb, they have locations all around the world in order to better assist their customers.
They found that being in a country within the European Union has benefits and struggles. After they joined the EU, they had more employee turnover and currency discrepancies, all while trying to adjust on a personal level with their families.”
“Overall, this company showed us how businesses operate in the EU and how they try to overcome challenges, striving to bring the best IT solutions to their customer base internationally.” 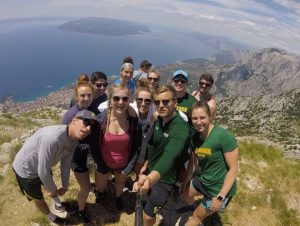 “Members of the Clarkson University trip hiked up the second largest peak in Croatia, Vosac. The peak is 1,422 m tall and located in Markarska. The views were amazing and very worth the hike up and down the mountain, which took about 2 hours each way.” 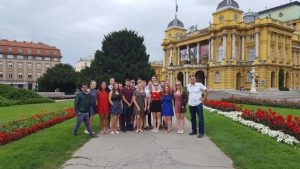 “When visiting the World Bank, we learned all about the issues they run into because of the countries they are dealing with. Day to day operations are in their hands; however, bigger decisions are made by the president of the World Bank, who is appointed by the President of the United States. Croatia may not have as much say in some of the bigger lending agreements because it is such a small country. They are often outbid and cannot compete with larger countries.”
“All of this shows that Croatia’s economy strongly relies on rules of the European Union and is greatly affected by the surrounding economies. Their levels of proficiency with capital agreements are strengthened through these deals made with the World Bank. Without the World Bank’s presence in Croatia, the country could notice problems with the strength of business among Europe and, specifically, within the European Union.” 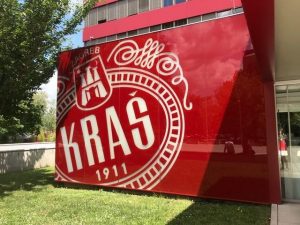 “We visited Kraš, a chocolate company, which occupies most of the space within the industry in European countries and also has a presence in the United States. I found their business talk with us to be the most intriguing. They have gained so much popularity with their product differentiation throughout Europe that they have made a large name for themselves and don’t have to do as much marketing compared to when they first started. They always try to innovate and test new products in certain markets, such as children’s and sugar-free markets. Through these tactics, they’ve gained more market share. Basically, in Croatia and surrounding countries, the only problems they face are trying to forecast as best as possible and continuing to produce high-quality chocolate for everyone to enjoy. Their product and name will continue to thrive because of how well they’ve upheld their brand image in consumers’ eyes.”
“We learned that their presence in the United States has been rather challenging. The market is so saturated with other companies, such as Hershey’s and Nestlé, that Kraš would have to do lots of advertising to try to compete on a large scale with them. Yes, Kraš has a smaller presence in the U.S., but they are happy to be in the market. They said it’s harder to be better-known because kids grow up eating Hershey’s and other popular brands of chocolate and then continue to consume those goods as they grow older, passing them down to their children. For the average American consumer to become familiar with this brand, Kraš would have to spend a great amount in marketing, especially to children and the younger generation.” 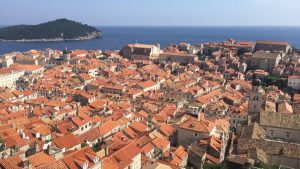 “We visited the city of Dubrovnik, the only city to withstand Ottoman forces. They protected themselves using a wall that surrounded the entire city, which we walked. The wall took about an hour to walk and had spectacular views all around.” 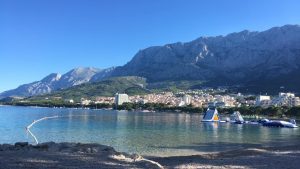 “One of my favorite parts about Croatia was the breathtaking views everywhere you went. This picture shows the city of. Two other students and I ran 6 miles in the morning with Professor Jukic along the coast and ended here. I’d say the run was well worth it!” 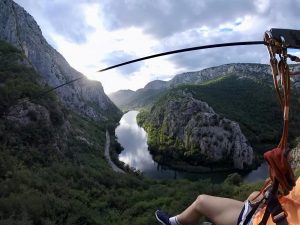 “We had the option to zipline across the largest canyon in Croatia, over the Cetina River in Omiš. The zipline consists of eight wires for a total length of 2100 m. As you can see, the views are again once-in-a-lifetime!! This was one of my favorite experiences on this trip. Scary? Yes! Worth it? Also, yes!” 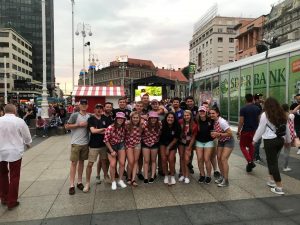 “We watched each game of the FIFA World Cup while in Croatia. The first game was definitely a night to remember for each student on the trip! We watched Croatia play against Nigeria in the capital of the country, Zagreb. The crowd had so much pride and excitement while representing their country that we became true fans that night. Croatia won against Nigeria 2-0 and everyone cheered, sang and celebrated! The students on the trip are still following the team through the upcoming championship game against France!”
“Overall, this trip was unforgettable! I’m thankful to Clarkson University for this opportunity to visit and explore the businesses and culture in such an amazing country. Professor Jukic and Dr. Cody Brown organized the trip perfectly, allowing us to discover what each part of Croatia has to offer. We students are truly grateful for their efforts to make the visit to Croatia something we’ll always remember and cherish.”

These are just a few of the many options you have to study abroad with Clarkson. These trips offer a great opportunity to continue your education while also broadening your horizons and exploring a part of the world that you may otherwise have never even considered visiting.