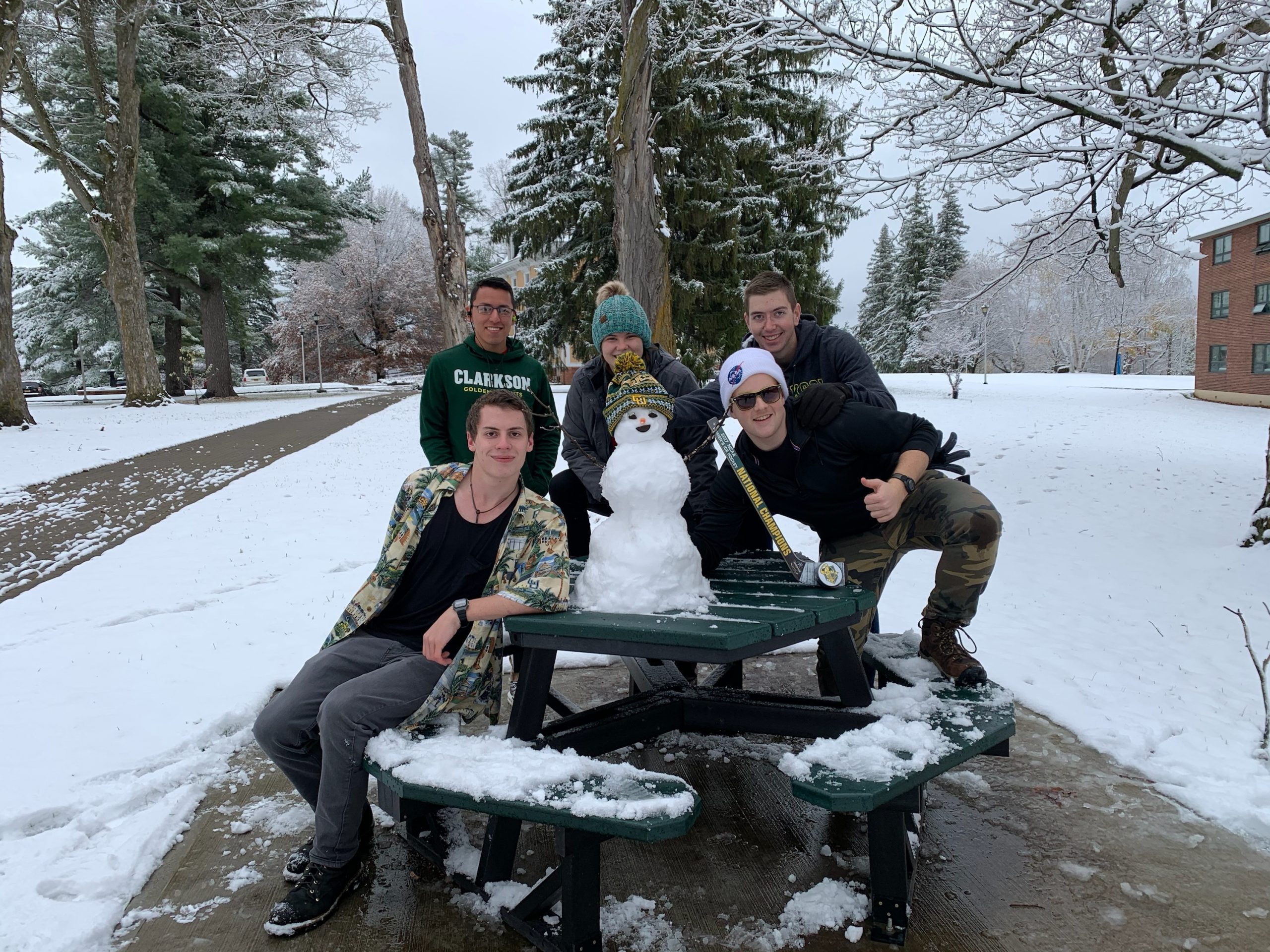 My name is Mikaela Morris ’23 and I am a sophomore, double majoring in physics and mechanical engineering at Clarkson.  I am from Cave Creek, a small suburb of Arizona’s very-arid desert capital, Phoenix.

The question I get most often is “How on earth did you end up in Potsdam?” So, I guess we’ll start there.

For most of my life, I wanted to be a doctor. But then in my junior year of high school, I took a physics class and completely fell in love with the subject. From then on, I was going to study physics in some capacity or another.  And thus began my college search.

Since I had lived in the desert all my life, I wanted to attend college somewhere you could see the leaves change, watch the snow fall and experience all four seasons.  So, I applied mainly to schools in upstate New York, where my mom had gone to high school.

A friend of hers told us about a small engineering school in upstate New York — Clarkson University.  When we planned our college tour road trip, Clarkson was on the list.

I have to be honest — my college decision-making process was not a romantic love-at-first-site story, but that’s not unexpected. I am a major overthinker and what college I was going to was the biggest decision of my life, thus far.

After the application process was over, Clarkson had made it to the finals.  I visited a second time and attended the GE Women’s Leadership Day and stayed overnight with a student. It was then that I had the sought-after moment of “Oooooo, this is the place for me! I can see myself spending the next four years here!” (So, a visit to campus is a must!)

One of the biggest aspects that drew me to Clarkson was the Physics Department. I had been looking at majoring in Mechanical Engineering. Most of the adults in my life didn’t think that majoring in physics would be a good idea, but I knew studying physics is what I really wanted to do.

Even though Clarkson is a relatively small school, its engineering program is quite large. But the physics program is small, which is a big plus!  Having a dozen or so physics majors per year means that the experiences within the Physics Department are very personal.  My academic advisor frequently checks in — well more than is required — and I know she is interested in my success.

Life at Clarkson, so far, has definitely reaffirmed that it was the right decision for me. As a physics freshman, I took almost the same classes as my engineering friends, but with some key differences.

We worked as a team to develop and test mathematical models for toy cars.  And by the end of the semester, we put our models to the test and competed against all the other teams in an outlandishly themed challenge session.  These sessions can become quite competitive.

The Team Design Lab challenged my way of thinking and my ability to take what I was learning in lecture and apply it to something I could use to make predictions.  It broadened how I think about problems and has had a positive impact on my other classes.

The Clarkson faculty does an amazing job making sure that students are supported academically.  I always felt I could go to my professor or TA during office hours, or set up times to meet with them outside of class.  They genuinely want students to succeed.  Clarkson is the best of both worlds: it has the resources and opportunities of a larger-scale university, but because of its size, you won’t feel like you’re getting lost in the fold.

Undergraduate research is highly encouraged in the Physics Department and it’s fairly easy to get started.  Nearly all of the faculty in the department are doing research and welcome interested undergraduates to join their teams.

In the second semester of my freshman year, I started looking into the research interests of the different physics faculty members. In all honesty, I didn’t understand most of the topics that were listed, but we all have to start somewhere!

I had been interested in space and I am contemplating commissioning into the newly minted Space Force, so I figured astrophysics was the way to go.  I met with Clarkson’s resident astrophysicist and director of Reynolds Observatory, Dr. Joshua Thomas, and joined his research group. I began working on a project over the summer to help improve the way data from the observatory’s spectrograph is processed.

So, if you want to do research while you’re an undergraduate, there are plenty of opportunities and many faculty members who would be happy to work with you.

Last, but not least, I must mention extracurriculars.  Clarkson has no shortage of activities, clubs, and professional organizations — 250 or so, to be more exact.  I am a member of a few widely varied ones.

I am a cadet in the Clarkson Air Force ROTC detachment, which was a big reason why I came to Clarkson.  Now, ROTC is not your normal extracurricular, but I have met people who have become my closest friends.

A more traditional organization, which I am a member of, is the famous Clarkson Pep Band, or infamous– depending on which way you look at it!  This rowdy bunch of music- and hockey-loving Clarkson students is a great way to decompress after a stressful week and a very exciting way to spend your weekend cheering on the Clarkson women’s and men’s hockey teams at home or away. I played saxophone in my high school marching band, so joining the Pep Band was a no brainer.

Those are the two main activities that am I involved in on campus, but the Physics Department supports the Physics Club, which is open to all physics majors.  They get together to talk about career opportunities in physics, grad school, research opportunities, and more.

Clarkson has clubs and organizations for most interests and getting involved on campus is the best way to meet people. So, if you take nothing else from this, you should absolutely join at least one organization on campus, because it truly makes the transition to college easier!

The biggest thing that stuck out to me when I was making my final decision about schools was something my mom pointed out.  She said, “The people at Clarkson — faculty and staff — care about you!”  She had come to that conclusion after only visiting Clarkson twice.

After being at Clarkson for three semesters, I have found the faculty, staff and students to be helpful, kind and welcoming. You’d be hard-pressed to find another community of people that is as committed to the success of the student body as Clarkson is!